STAT 432 is not a course about R. It is however, a course that makes heavy use of R. Because of this, you will need to be familiar with R. This text will point out some things about R along the way, but some previous study of R is necessary.

The following reading suggestions are long. While it may seem daunting to read all of this material, it will likely prove to be valuable. A smart strategy would be:

Whether you’re a novice or an expert, there is a high probability that any effort towards reading these sources will provide a return. If you use the strategy above, over time you will start to see the bigger picture.

R Markdown will be used throughout the course, but you will not be required to use R Markdown until the final weeks when we begin working on data analyses. At that time, we will suggest some additional reading about R Markdown. When working on quizzes until then, you can use either an R script or an R Markdown document, whichever you are more comfortable with.

In addition to the above readings, the following resources are more specific or more advanced, but could still prove to be useful.

R tutorials and advice are plentiful online. While we do not want to discourage you from using the resources above, or using your own creativity, the following sections will specify some strong suggestions for how to use R, RStudio, and R Markdown in STAT 432.

In other words, information below here supersedes any information from the above sources.

Due to some odd default settings in RStudio, some students never clear their R environment. This is a problem for a number of reasons. (It could prevent your results from being reproducible.) To get ready for STAT 432, do the following: 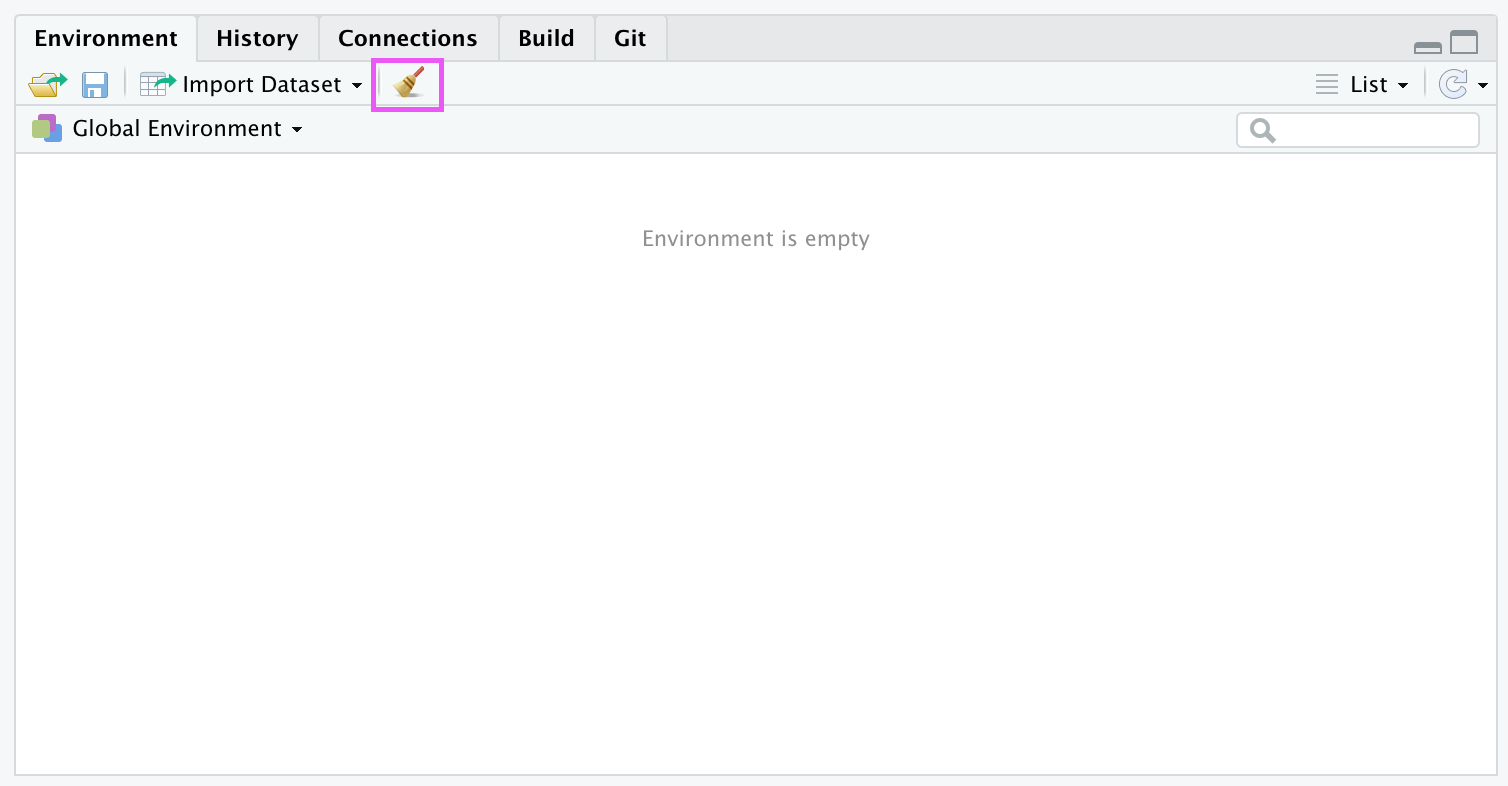 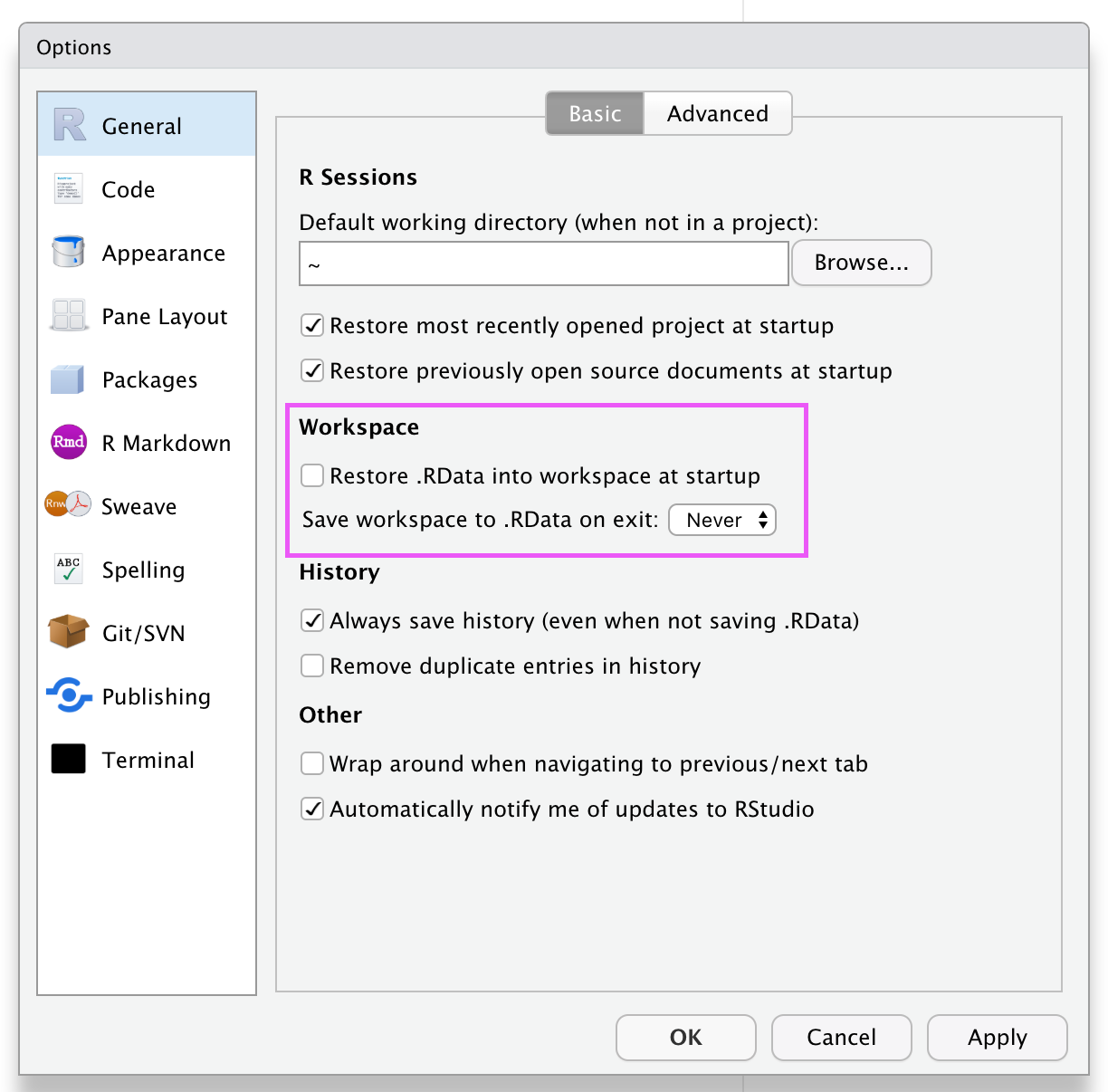 This will save you a lot of headache in STAT 432 and the future.

You should always use the most up-to-date version of R and RStudio. You must use at least R version 4.0.2.

If your output matches the output above, you’re all set. If not, run:

Then re-run RNGkind() and everything should match up and you should be good to go!

Be sure to keep your packages up-to-date. To do so:

At this point, you may be asked: “Do you want to restart R prior to installing?” Select “Yes.” If asked again, Select “No.”

During the update you may be asked “Do you want to install from sources the packages which need compilation? (Yes/no/cancel)” Type no and press enter. Do the same if you encounter this when installing packages.77

Code needs to be read by two distinct groups:

Computers will complain, very loudly, when you write “bad” code, that is code that does not run. We need to write code that is syntactically correct for the computer to be able to “read” our code. Computers only care about syntax. If we relate this to natural language, we would say that computers really only care about grammar and punctuation. They don’t worry about style like phrasing, tone, etc.

While computers will complain about bad code, does anyone really care about wasting their time? (OK, sure, computer scientists might.) If we give them bad code, they try to run it, fail, then complain. However, they’re soulless machines, they can handle it.

Humans on the other hand have a finite amount of time on this earth. Even if we solve aging, we still have to deal with the heat death of the universe. Thus, while wasting a computer’s time is no big deal, wasting a human’s time is, frankly, immoral. What does this have to do with R programming? Humans are going to read your R code. One of those humans is likely to be you, but future you. To make this reading possible and efficient, you need to develop style.

Here is some code that a computer can read, but a human will struggle to read:

Now, written again, but readable by a human:

To the computer, these are the same. To a human, one makes you want to pull your hair out, the other you can glance at and have a pretty good idea about what is going on.

Style is subjective, but we’ll define some guiding principles, and a few rules.

So as to not have to define a style from the ground up, we will use the tidyverse style as our initial reference.

We will agree with the vast majority of the guidelines here. The exceptions are listed in the next section.

Some of the previous section applies here as well, but additionally, some more specific R Markdown style guidelines:

Now that we’ve overwhelmed you with information about style, we will leave you with the real advice. The most important thing to consider when evaluating the style of your code is consistency.

In order, you should be consistent:

Blindly following the rules is foolish. Breaking rules can be fun! If you do it in a way that makes life easier for everyone, by all mean, do it.

B.3.9 Objects and Functions

To understand computations in R, two slogans are helpful:

In STAT 432, the objects that we will encounter will almost always be:

If you become proficient at creating, manipulating, and accessing these objects, you will likely have success in STAT 432.

You might think that you can simply type cars_mod to see what was returned by lm().

This is a huge mess, but most importantly, at the top we are told that cars_mod is a list. (It’s technically a object of class "lm", but it functions like a list.)

Note that what is returned here is a vector, so we could pull out a particular value using vector syntax.

Since lm() truly returns an object of type "lm" we can pass cars_mods to some generic functions, and then specific versions for objects of type "lm" will be used.

Hey, wait, what is returned by summary()?

The summary() function returns an object of type "summary.lm" which functions as a list!

You can also use the View() function, which is specific to RStudio, to view the structure of any object.

To get documentation about a function in R, simply put a question mark in front of the function name and RStudio will display the documentation, for example:

Frequently one of the most difficult things to do when learning R is asking for help. First, you need to decide to ask for help, then you need to know how to ask for help. Your very first line of defense should be to Google your error message or a short description of your issue. (The ability to solve problems using this method is quickly becoming an extremely valuable skill.) If that fails, and it eventually will, you should ask for help. There are a number of things you should include when emailing an instructor, or posting to a help website such as Stack Exchange.

If you follow these steps, you will get your issue resolved much quicker, and possibly learn more in the process. Do not be discouraged by running into errors and difficulties when learning R. (Or any technical skill.) It is simply part of the learning process.

This section should be expanded over time, but for now, two strong suggestions: